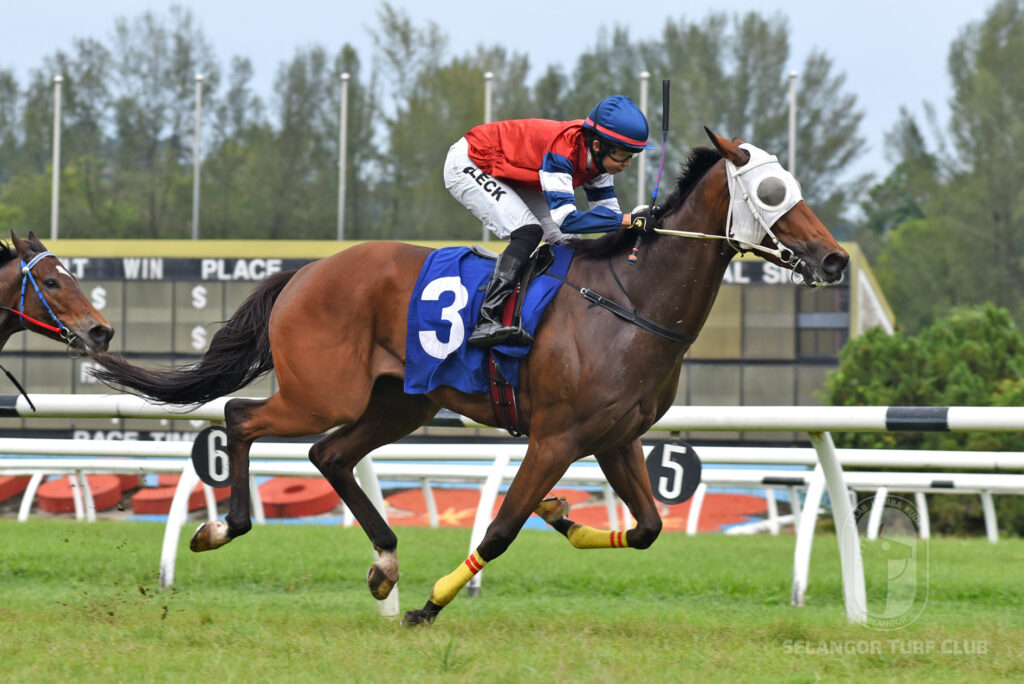 After arriving unraced in January last year, BERRY BLISS spent more than a year preparing for his racing debut, with many trials behind him before he finally made it to the races.

As it turn out, it has been a worthwhile wait for his connections, especially his trainer Charles Leck who also owned the gelding until recently.

The New Zealand gelding made his debut in a Open Maiden event over 1100m at Sungei Besi last March and quickly showed his potential with a hard-fought win.

Since then, BERRY BLISS has won another three races in six starts in Class 4. Only last week, the four-year-old made all the running to win over 1500m.

Ridden once again by his regular rider Clyde Leck, BERRY BLISS backed up that win when he defied a promotion to win the Class 3 – 1400m handicap at Sungei Besi here today.

BERRY BLISS was pulling his head off racing in second spot behind the pacemaker KRUGER as the field settled down.

The Charm Spirit gelding collared the leader at the top of the straight but KRUGER fought back gamely and held a slight advantage until the 100m when his earlier effort finally took its toll.

BERRY BLISS raced past him with ease and cleared away in the closing stages to win by 2 1/4 lengths with STRONG N POWERFUL getting up close home to beat KRUGER for second spot.

“I’m really happy to see BERRY BLISS win again,” said Clyde. He has shown tremendous improvement after each run and I believe he will continue to improve. He has won five times for me and there will be more to come from him.”

“He is an improving type,” said the Charles Leck. “He won easily last week and was jumping on his toe the entire whole week after the run.”

“I knew he would be hard to beat again even though he has gone up a class. My only concern was whether he could handle the wet track. He will continue to improve and also get more distance.

“It’s good to have such a consistent horse that is owned by a long time friend Richard Tea.”