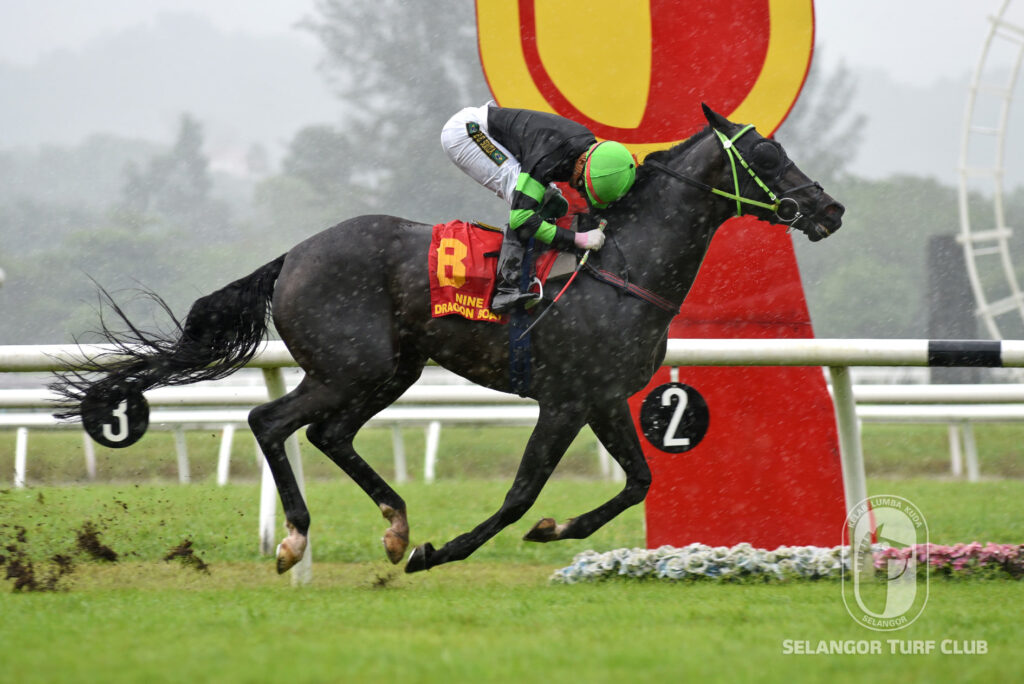 In what was the most sensational performance seen on the local circuit for many years, AWESOME STORM annihilated his rivals to win the RM200,000 Nine Dragon Boat Tunku Gold Cup over 1200m at Sungei Besi here today.

The win provided a fitting farewell to Brazilian jockey Jose De Souza who heads off to Mauritius to take up a new riding assignment.

The Phenomenons gelding was the firm favourite in the set-weight event after having won all previous five starts in the country.

But few could have imagined what was to come in the first big race held in the country for more than two years.

Ridden by Jose De Souza, AWESOME STORM surged to the front after a good jump to take up the running with three-time winner of the Cup VOLCANIC GENERAL settling in second spot.

AWESOME STORM led into the straight two lengths ahead of VOLCANIC GENERAL but it soon became clear that the latter could not go on like in previous years.

It was VIOLET who moved up to second place shortly after the 400m and the leader was increasing his lead with every meter of the home straight, revelling in the heavy rain that fell prior to the race and the resultant wet track.

At the winning post, he was 8 1/2 lengths clear of the rest. XENA flashed home to take second place, just a nose ahead of VIOLET. Also in the photo was LONELY BOY, a head further back.

“AWESOME STORM is a super sprinter,” said winning trainer Simon Dunderdale. “We were a bit worried about the wet track but it didn’t bother him at all. It was a brilliant win.”

Brilliant indeed for the Australian gelding who won a minor race in five starts in Australia but has nothing but a sensation in his new country. Just four years old, AWESOME STORM is expected to dominate the sprint scene for many years to come.