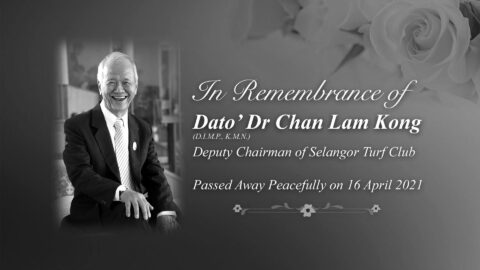 The late Dato’ Dr Chan was a retired Medical Practitioner who had his early education at Methodist Boys School in Kuala Lumpur before studying medicine at University of Malaya in Singapore. Dato’ Dr Chan served in the Malaysian Medical Services for a number of years before embarking on his own medical practice in Kuala Lumpur. Dato’ Dr Chan who retired from the medical services in 1995 leaves behind his wife Datin Lynnette Ong Kuen Lien and their three children.

On June 30, 2011, Dato’ Dr Chan was conferred the Pingat Kesatria Mangku Negara (K.M.N.) by Seri Paduka Baginda Yang di-Pertuan Agong in conjunction with his Majesty’s Official Birthday for the year 2011.

Dato’ Dr Chan was conferred the award of “Darjah Indera Mahkota Pahang” (D.I.M.P.) which carries the title “Dato” by His Royal Highness the Sultan of Pahang, in conjunction with His Royal Highness’ Birthday on 24 October 2012.

Dato’ Dr Chan has contributed immensely towards the growth of the racing industry and equestrian sports in the country. His passing is a great loss to the industry. May his soul rest in peace.