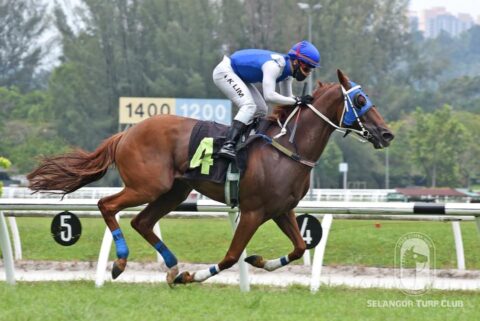 After a lapse of two years, eight-year-old ZA’EEM appears to be racing at his best form and consistently again.

The Sakhee’s Secret gelding was very consistent as a youngster in New Zealand with five placings in eight runs without winning.

When he came over to Singapore, he managed two wins and a third in his first five starts at Kranji.

After a long run of ‘outs’, ZA’EEM found his way to Malaysia, picking up a win in his third run in the country in early 2020. He managed just one placing in the next 25 months before he struck winning form again.

A win in Class 4 last March over 1500m was followed by another hard-fought win over 1600m two months later.

Three weeks ago, ZA’EEM found one to beat in a combined Classes 4 and 5 race but he totally outclassed his rivals in a Stayer Race over 1775m at Sungei Besi here today. All races today were run on the No 2 track.

Rank outsider ARROGATE ACHIEVER attempted to make all the running  and was several lengths clear of the field at the top of the home straight.

ZA’EEM, who led the chasing pack at the home turn, soon switched into top and went after leader. He caught him at the 200m, then raced past him with ease to win drawing away by 4 1/4 lengths.

“It was my first time riding this horse but he has good recent form,” said winning jockey Lim Aun Kean. “The other were much faster than him at the start and I had to settle in midfield.

“But I found the pace too slow so I moved up him up to third spot, then second at the home turn. I knew he was going to win at the top of the straight. He will win again if he maintains this sort of form.”

“ZA’EEM is good and honest horse, always giving his best in a race,” said trainer AB Abdullah. “He has been improving and should win again in Class 3.