Newly-licensed trainer Parama Sivan a/l M S Veerapen, or simply known as V Sivan to racing fans, could not have asked for a better start to a new chapter of his career when he saddled a winner on first day on the scene. 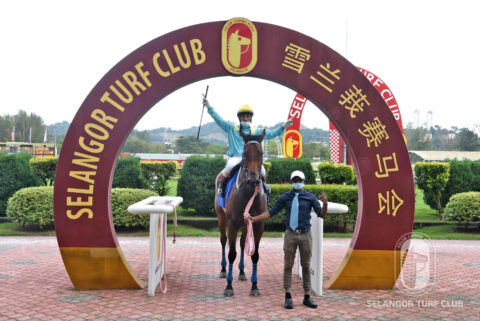 “It’s has been a long journey since my apprentice days” were his first words after BEST BAY scored a comfortable win in the final event at Sungei Besi here today.

Sivan had a successful career in the saddle, always featuring high in the table both as an apprentice jockey and a senior rider.

After hanging up his boots, he became a stable supervisor, then an assistant trainer, most recently to Malcolm Thwaites, before he set up his own stables.

BEST BAY failed to score but was placed three times in 15 starts in Singapore.

After more than a year on the sidelines, the Darci Brahma mare was sent to Malaysia where she has scored twice under Thwaites.

BEST BAY is one of many horses who moved with Sivan when he was granted stables at the Selangor Turf Club.

“I am extremely happy to get my first winner on the my first day. I am also grateful to Selangor Turf Club for granting me stables and to the owners for their support,” said Sivan.