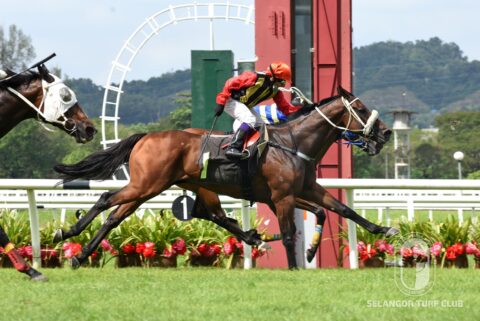 SKYDANCE ECLIPSE scored a deserving comeback win in the Metro A event over 1700m at Sungei besi here today.

It has been a long road back to fitness and form for the Australian gelding and the occasion could not have been more dramatic.

Ridden by Laercio De Souza, SKYDANCE ECLIPSE settled in second spot together with DANCING RAIN behind the pacemaker TRINITY GRACE who was a clear leader in the early part of the race.

When TRINITY GRACE came under pressure at the top of the straight, DANCING RAIN stole a run on the rails and immediately shot clear. SKYDANCE ECLIPSE was struggling to get going at this stage.

SKYDANCE ECLIPSE eventually opened up and flashed home, but he laid in badly and forcing De Souza to use the whip with his left hand momentarily.

SKYDANCE ECLIPSE caught up with DANCING RAIN and they fought stride-for-stride in the closing stages, flashing past the post together.

SKYDANCE ECLIPSE got the verdict by a nose, then had to survive an objection by the rider of DANCING RAIN for alleged interference.

SKYDANCE ECLIPSE was purchased for racing in Singapore but after four unplaced runs at Kranji, he was sent to trainer Frank Maynard.

He was an instant hit in Malaysia, winning five of his first six starts in late 2018 and 2019. The gelding then went amiss, spending much time on the sidelines before winning again in December 2020.

SKYDANCE ECLIPSE raced just once last year (finishing second) and has found one to beat twice in five starts this year before his comeback win.

“It was a well deserved win,” said Maynard. “The horse has been knocking on the door, running second with big weight. He fought off all challengers down the straight.”

De Souza rode the horse twice this season and was beaten into second place on both occasion.

“It was a bit of a surprise. He showed so much early pace despite his big weight and I am very happy,” said De Souza who enjoyed his best ever afternoon with five winners.