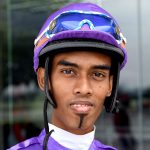 After considering the evidence and also reviewing the performance of SACRED TONIC, the Stewards found Jockey S Zulfikri guilty of a charge under MRA Rule 44(10) for failing to ride to the satisfaction of the Stewards. The particulars of the charge being that:

The Stewards took into consideration Jockey S Zulfikri’s riding record, mitigating factors and his submissions on penalty. He was suspended from riding in races for a period of three (3) months and fined the sum of RM20,000/-. This penalty is to be served cumulatively with any other penalty. He was advised of his Right of Appeal.