Women have been continuously moving into the male dominated industries for many years. Finance, engineering and construction industries are some of the many professions that are being taken up by women through education, passion and determination. The one dynamic female who has stamped her mark in the all-male dominated field as the very first female jockey in the Malayan Racing Association (MRA) circuit is Magdalene Tan May Ling.
Singapore born Magdalene, began her horse racing journey when her dad, an avid race goer asked her “jokingly” if she was interested to become a female jockey after seeing an advertisement. At this point, she was on a crossroad after completing her O levels and deciding on a career path. 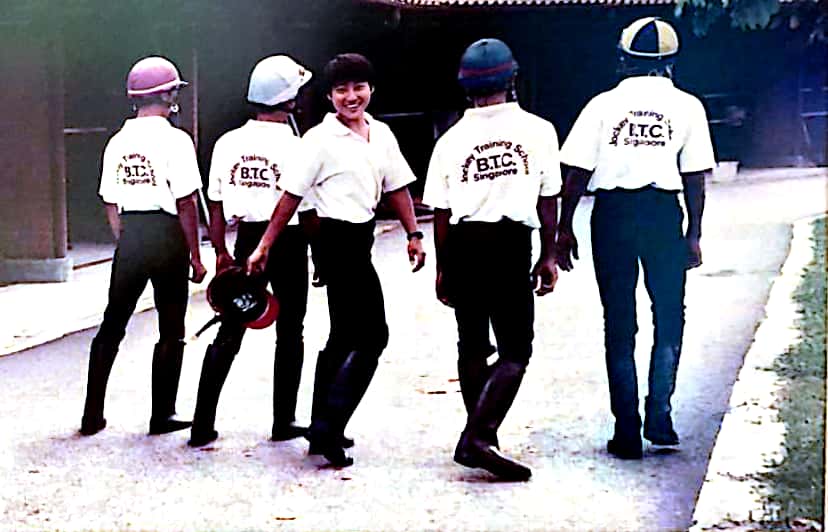 Although her only experience with horses was a single pony ride in Kuantan, she put in her application because of her love for sports. “Mr Phillip Tan, from the Apprentice School came knocking on my door one day to enquire if anyone by my name had put in an application for a female jockey” said Magdalene. This was a period when there was not even a single female jockey in the whole of Asia.
In the beginning, her family members especially her mum and two elder brothers were not in favour of her choice but gave up after knowing the seriousness of her decision to become a jockey. They provided her some advice on how to strive in a male dominated field and gave her their blessings.
Magdalene was selected and started her two years apprentice training together with another aspiring female jockey who lasted only three months due to the nature of the training, although she had an equestrian riding background. Some of the chores carried out at the training were hauling 20 litres of water every morning, shovelling horse manure and controlling a 500kg horse galloping at a speed of 60 km/h. 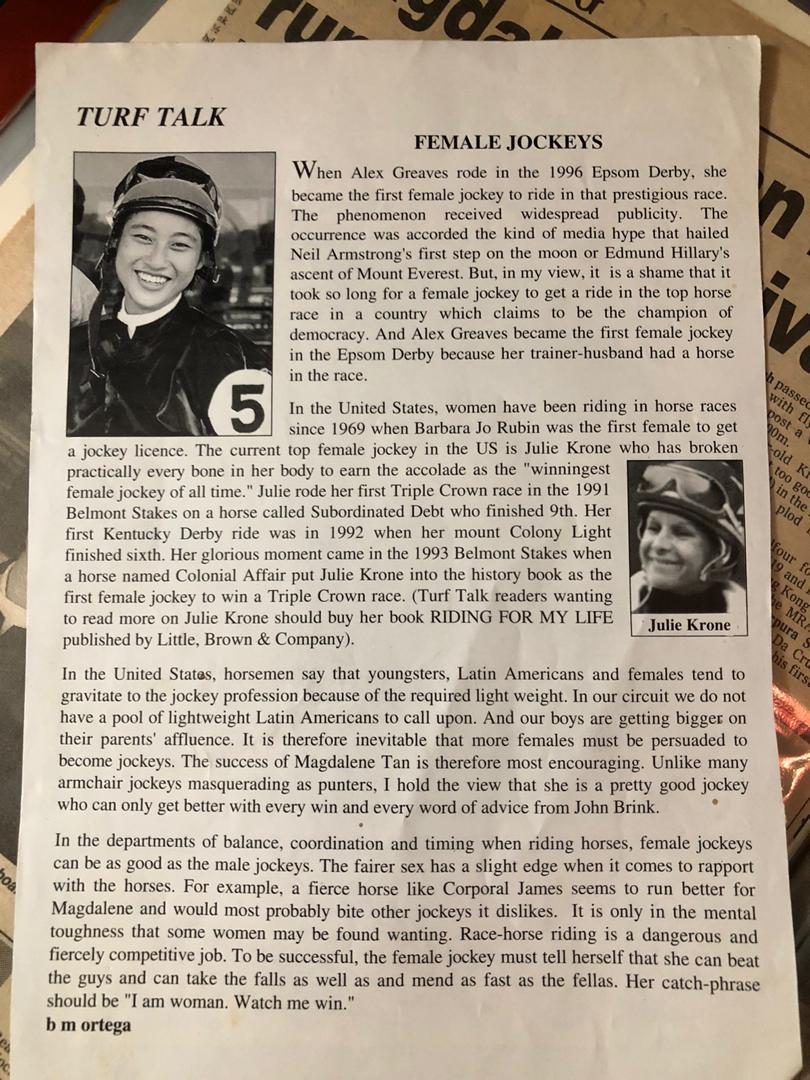 Apart from this, being the only girl among the trainees, there was also a lot of teasing and bullying by the male jockeys which Magdalene claims are all “harmless” and “normal”, which she had already experienced growing up with 2 brothers who often bullied her. The male jockeys would be too anxious if she wins in any of the skills as the one who loses to her will be laughed at by the other boys.
When she completed her training, she got to carry out her Apprenticeship under French trainer Claude Charlet who was initially shocked at having to train a female jockey as Magdalene happened to be his very first female jockey. Charlet who believed that the training involved to become a jockey is a “boy’s job” was full of praise for her when she got second place at her debut race in 1995 at the Selangor Turf Club riding on Ka Fai Boy. 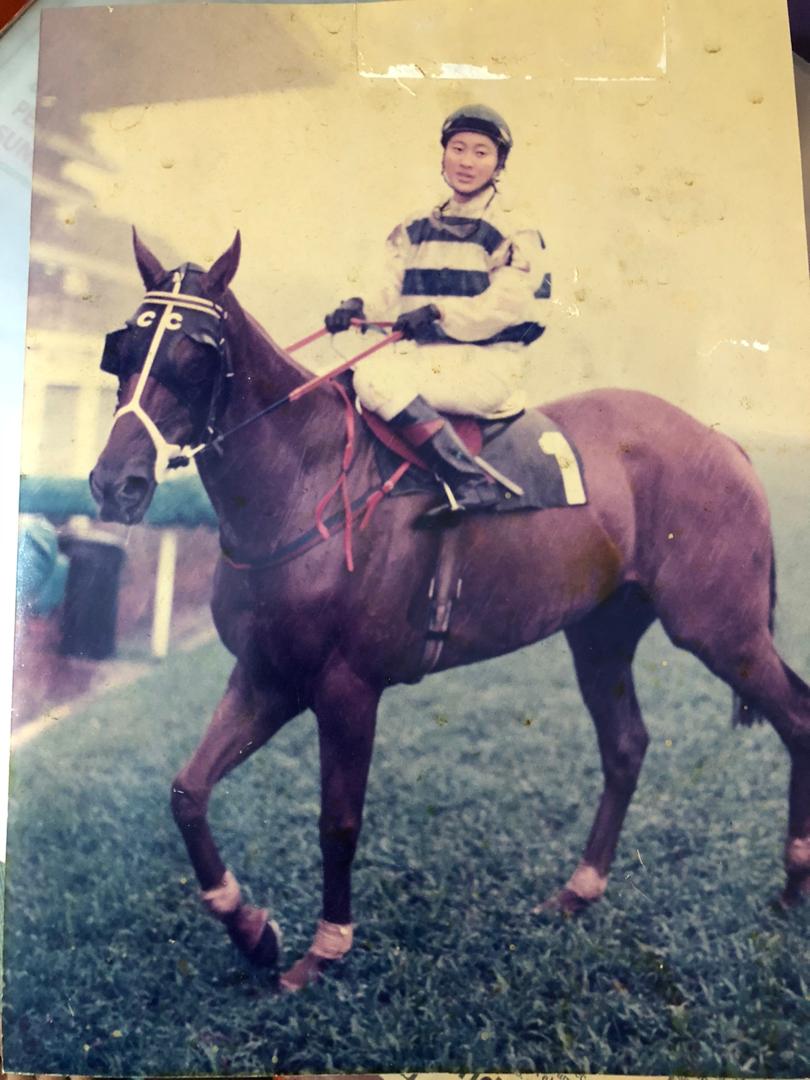 This incredible woman further added that her most memorable moment was winning on John Brink trained Corporal James which won five times in a row from Maiden to Class 1. This remarkable feat drew the attention of horse racing enthusiasts and gained a lot of admiration and praises calling her a tough woman jockey in a dangerously competitive job.
The 46 year old Chinese of Baba Nyonya origin declared that her very first win was one that was a wonderful and precious moment which is too complex to be explained. It was a feeling of intense joy, excitement and utter disbelief as she rode amidst a heavy downpour with rather poor visibility on Shanghai Express trained by Claude Charlet to an astonishing win. “I had to get confirmation of my win and felt over the moon when I found out it was true” said Magdalene with so much pride at her very first accomplishment as an apprentice jockey.
The highlight of her career came when she was riding for Agasam Stable who was her strongest supporter as she was offered most of her rides. She was able to develop the confidence needed to race along the male jockeys as she perfected her skills in balance, coordination and timing that is required of a good jockey.
At present, she is proud of her 32 winners which she gained throughout her four and half year stint. During this period, she also received six months of riding exposure in Adelaide, under the supervision of the late trainer David Dalfour. In 1998, she decided to hang her boots to concentrate in her family life.
This mother of two daughters is not afraid to talk about the struggles she had in her life as she says that these challenges are the significant part of her life that had moulded her into a better person. She had a failed marriage but she was able to believe in love once again and is happily married now. 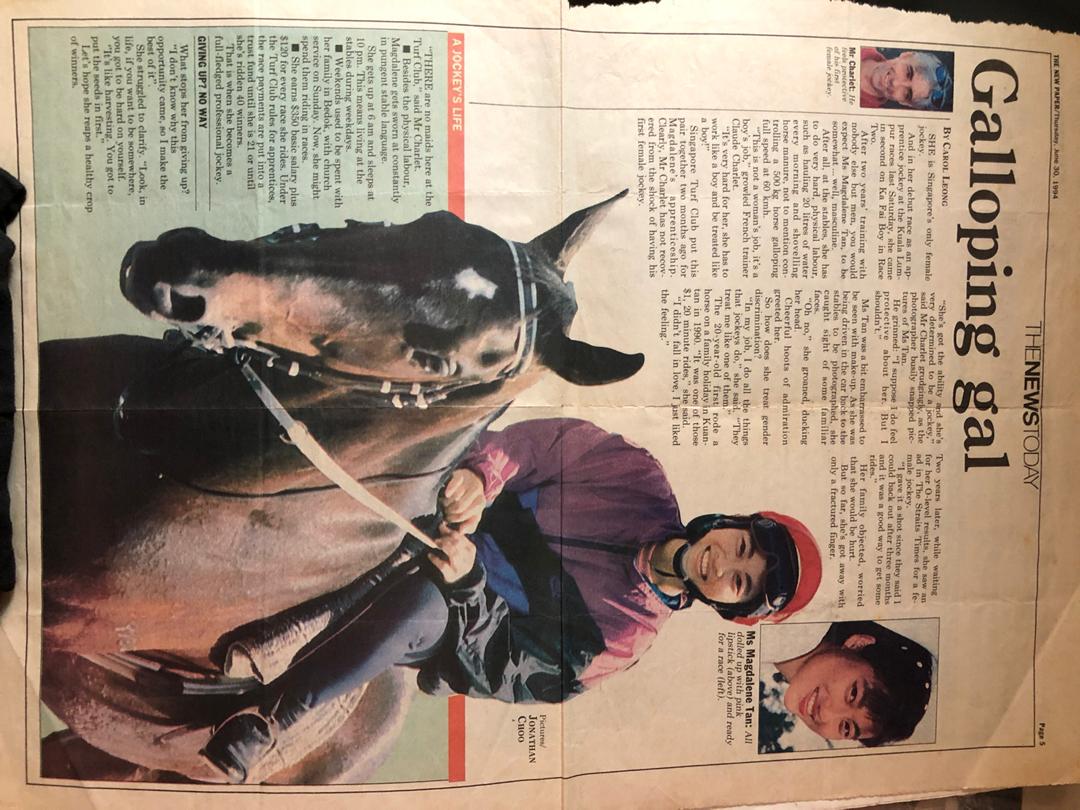 When asked about what she feels like to be the first female jockey in the MRA circuit, Magdalene said that in the beginning it did not dawn on her that she was doing something extra ordinary. “It was only after I retired as a jockey that I realised that it was indeed a great achievement,” and she believes that her children too are proud of all the accomplishment of their mother who will always reign as the first female jockey in Asia.
The advice from this first female jockey of Asia to all aspiring female jockeys is: “It’s very important for you to be mentally and emotionally strong and physically too of course, but to be mentally strong is more important because you have to overcome the stress of the training as well as the stress caused by those who are waiting to criticise you because of your gender.”
The bond that she had created with horses was too strong that it drew her once again into the horse racing industry to continue doing what she loved but not in the same way. At the encouragement of the well-known race commentator Walter Vijay, she was once again back in Selangor Turf Club as a race presenter.
“Initially, I was nervous to go live as a presenter,” but as usual her determination and the winning streak that she carries around since her jockey days has made her strive in this new found career since 2015. She is also a track rider for leading trainer Richard Lines and she is happy to be once again connected with the first love of her life which are the horses.