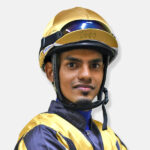 When blocked for a clear run on straightening, LEADING CELLIST (App A Suriya) shifted out, bumping the hind-quarters of TWENTY-SIXTWELVE (J Daniel). LEADING CELLIST was then blocked and shifted in. This caused ATLANTIC ARROW (S Ruzaini) to be checked near the 250M.

On inquiry, App A Suriya, the rider of LEADING CELLIST, in the presence of his Employing Trainer, C Leck, pleaded guilty to a charge of careless riding under MRA Rule 44(9)(a)(ii) in that he shifted in at this stage.

In assessing the penalty, the Stewards took into consideration App A Suriya’s guilty plea, mitigating factors, previous riding record and his submissions on penalty. He was suspended from riding in races for a period of two (2) race days with effect from 6 December 2021 and to expire on 18 December 2021, both dates inclusive. He was advised of his Right of Appeal.