Low To High for Gill 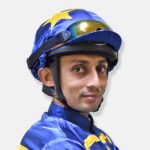 Jockey HS Gill (33 wins) has stolen the Malaysian jockeys title on the final day of the season, when he edged out Jackson Low (32 wins) to clinch his second title in a classic nail-biting finish that came down to the final race of the the day, where Low finish 2nd and lost the title.

Gill started the weekend of racing trailing Jackson Low by just 1 win. The two riders exchanged blows winning six of the 15 Penang races with Gill landing four wins to Low’s two wins, enough to hand him the victory by one win.