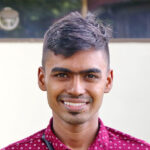 At approximately the 350M-mark, LUCKY TIGER (App A Saran) shifted outwards, resulting in TRIPLE ONE STAR (App S Sia) becoming crowded and having to check.   An objection was lodged by App S Sia, the rider of TRIPLE ONE STAR, placed 3rd   against LUCKY TIGER (App A Saran), placed 2nd on grounds of alleged interference at approximately the 350M-mark.   After considering all the evidence, the Panel of Stewards were of the opinion that TRIPLE ONE STAR would have finished ahead of LUCKY TIGER, but for the incident, upheld the objection and the results were amended as follows:-

At a subsequent inquiry, App A Saran, the rider of LUCKY TIGER, in the presence of his acting master, Trainer S Shanmugam, pleaded guilty to a charge of careless riding under MRA Rule 44(9)(a)(ii) in that whilst riding LUCKY TIGER at approximately the 350M-mark, he shifted outwards, resulting in TRIPLE ONE STAR  becoming crowded and having to check.

In assessing the penalty, the Panel of Stewards took into consideration App A Saran’s guilty plea, disciplinary record and mitigating factors.  App A Saran was suspended from riding in races for a period of two (2) race days, effective from Monday, 3rd January 2022 and to expire on Sunday, 9th January 2022, both dates inclusive.   He was advised of his right of appeal (1.45pm).

Jockey J Daniel, the rider of GOOD NEWS was dislodged on the pull-up and was subsequently certified fit to ride by the Club Medical Officer.