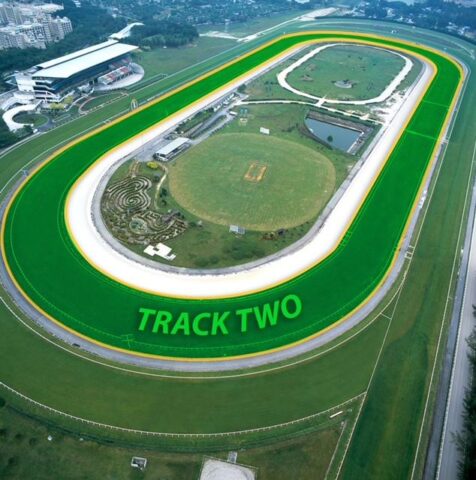 In an effort to have a viable alternative to conducting races at the Sungei Besi Racecourse, the Selangor Turf Club would be hosting its races on ‘TRACK TWO’ during its one day race meeting on 4th June 2022.

‘TRACK TWO’, the inner track of the Racecourse with grass surface, has been constructed at the same time with the Main Track and with the same facilities, when the racecourse moved to Sungei Besi from Jalan Ampang in 1993.

‘TRACK TWO’, in a shape of Symmetrical oval has a circumference of 1650 meters with two straights and two turns and the width ranging between 25 meters to 27 meters. The length of the straight or ‘run-in’ is 385 meters.

The Club with the trainers and riders have tested all safety and service procedures to ensure the readiness of ‘TRACK TWO’ for races and have also hosted ‘mock’ races over 1275 meters and 1700 meters. At the moment, each race on ‘TRACK TWO’ will be limited to 10 runners.

“Racing on the ‘TRACK TWO’ will have a different dynamism to that of racing on the main track. With its shorter ‘run-in’ and lesser camber gradient on the turns, racing would be more competitive, whereby race tactics and skills of riding would be an important factor” said Chairman of Selangor Turf Club, Tan Sri Datuk Richard Cham Hak Lim.