All Joy for No Fun No Gain 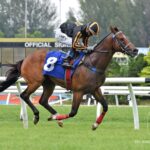 A change of scenery has totally transformed NO FUN NO GAIN, who went through two seasons without even running a place in Singapore but has now picked up two wins in two starts after crossing the causeway.

The Pins gelding was purchased for NZ$130,000 as a yearling by his former trainer Stephen Gray and scored in his debut in 2018. He went on to pick up three more wins in his next seven starts.

But after back-to-back victories at the tailend of 2019, the New Zealand gelding went off the rails in the next two years, failing to show up in 11 runs.

Following a five-month layoff, NO FUN NO GAIN ran last in a trial last March and days later, was on a float to Kuala Lumpur to the stables of trainer Richard Lines.

NO FUN NO GAIN did not set the turf alight in his first trial here last month when he finished fourth but days later, easily accounted for a Class field over 1200m at Sungei Besi. This, after he struggled to get into rhythm until the final 200m of the race.

Promoted a class, the six-year-old showed even better form when he trashed his rivals by 4 3/4 lengths in the Class 3 – 1200m handicap today.

Sitting quietly behind the leaders early, NO FUN NO GAIN took a run on the inside of horses at the 300m and immediately shot to the front and drew clear.

“He is a horse that has really appreciate the change in scenery since he had arrived at Selangor Turf Club,” said Lines. “He is a happy horse and he he will certainly progress further.”

Yudanyl Aify, who rode him in both his two runs so far, said: “He was not that comfortable in his last run but gave an much improved performance today. He will win more races.